This site is in development, and your current browser is v. 2 (CCBot/2.0 (https://commoncrawl.org/faq/)) 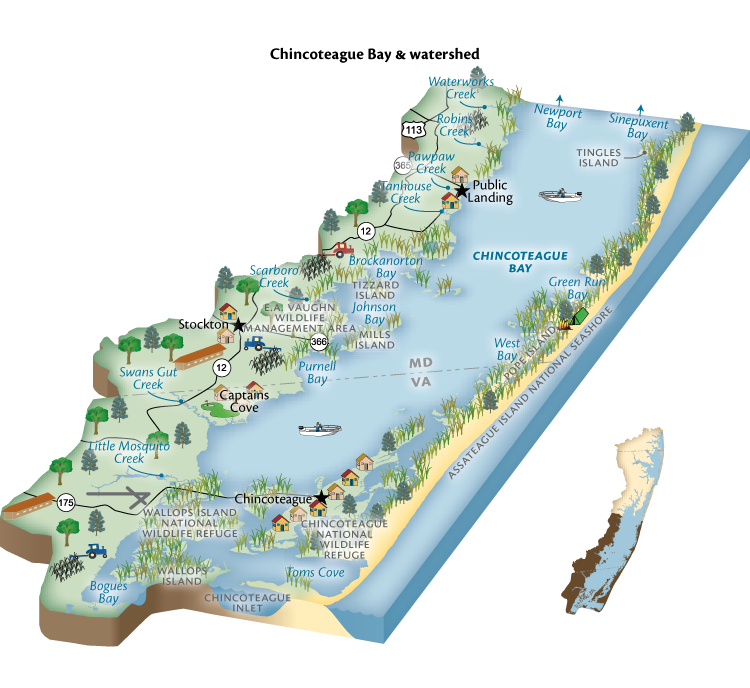 Chincoteague Bay watershed is the largest of the five watersheds.  It includes land south of Langmaid Road to the Virginia border and into Virginia.  Half of the drainage area is in Accomack County, Virginia, including the town of Chincoteague.  Tributaries include Paw Paw Creek (at Public Landing), Tanhouse Creek, and Swans Gut Creek in Worcester County.  The villages of Girdletree and Stockton are also within the watershed. Chincoteague Bay watershed contains extensive marshes, farms, and forest; close to half of the watershed is forested.  Ten of twelve wetlands of special state concern are in the Chincoteague Bay watershed.  These are sites of populations of rare, threatened and endangered species.  The bay’s importance to migrating waterfowl is noted on an international level.

Nutrients and phytoplankton have been increasing in recent years in Chincoteague Bay.  Seagrass coverage increased between 1986–2001. However, this increase leveled off and is now trending downward.

Approximately one half of the bay drainage is in Virginia, and includes the town of Chincoteague, which contributes significant nonpoint source pollution to the bay.

Bay islands are being lost to erosion, sea-level rise, and natural succession. They provide essential habitat for numerous waterbird species as well as other organisms.

Agriculture is essential.  However, agricultural activities such as tillage and the application of manure/poultry litter/chemical fertilizer/pesticides can contribute pollution to our waterways, and in Chincoteague Bay watershed it is the largest contributor of nutrient pollution (in Maryland).  There are approximately two dozen poultry operations and over 12,000 acres in crop production in Chincoteague Bay watershed.  Extensive ditching of streams reduces stream quality and increases nutrient contributions to the bay.

With a new emphasis on coastal resiliency, the state of Maryland is funding projects that use nature-based solutions to address challenges posed by sea level rise.  MCBP, with funding from the Maryland Department of Natural Resources, has developed a plan to protect and enhance Tizzard Island in Chincoteague Bay to ensure the important habitat it offers is not significantly lost to changes due to sea level rise.

Conservation practices, often referred to as BMPs (Best Management Practices) are implemented on farms.  These include conservation tillage, cover crops, forest buffers, and other practices.  Close to half the cropland in the watershed is placed in cover crops annually.  Farmers also implement various other practices with support from USDA and the state’s Soil Conservation Service that reduce non-point source pollution.

How You Can Help